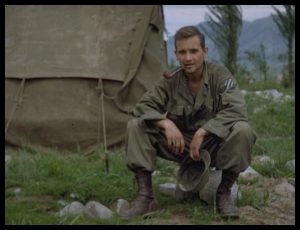 On November 11, we celebrate Veteran’s Day. While I honor all veterans on this day, my thoughts turn to a few special individuals who served in our country’s military over the years.

I turn to those men and women in my own family, close and extended, who served honorably in the military. Many individuals in my family, from the Revolutionary War to modern military actions, have served our country with distinction. Some remain alive only in my memory and others are very much alive in flesh and blood. Today, I honor them all.

First, I turn to my immediate family and look towards my dear father who served as a private both in the tail end of World War II and in the very center of the Korean War. He never accrued much rank in the Army but he was always proud of his service and he regularly reminded me, “there are no atheists in fox holes.” I suspect he learned this fact experientially in Korea serving as a forward scout. Today, I remember and honor him.

From my father, the eyes of my imagination needn’t look too far to see my Uncle Ralph. The memory of my Uncle Ralph looms large in my imagination. He was the husband of my father’s sister, Shirley, and while he and his family lived a good distance from my family, I saw him a number of times over the years. I heard many stories, handed down through my grandmother, father, and aunt, highlighting my Uncle Ralph’s exploits in World War II.

I once found a yellowed and frayed piece of paper in my father’s belongings which looked like a telegram or some type of official military communication. I don’t know if it was an original but I do know the words written there, some in abbreviations, amazed me.

This is what it said: “This soldier has shown exceptional bravery in combat. Refused a Congressional Medal of Honor after refusing a battlefield commission of 2 Sep 44 in action which he killed 56 SS of the Herman Goering Mtn. Div., captured and wounded 41 others, and destroyed 2 Tiger tanks while disabling one other. He was responsible for saving the 385th Inf. Regt. from annihilation. During the Battle of the Bulge, while wounded, he supervised evacuation of the 76th Cav Rcn Trp with its wounded after all its officers had been killed and remained behind to cover its withdrawal. When met again after five days, he had killed 38 more enemy soldiers. Again refused battlefield commission. And in action of 28 Mar 45 in which he was temporarily blinded, he conducted the defense of his position and saved it from destruction. Again refused commission. It is the decision of this board that this ind be given a commission when he so desires. To men like this our country owes much. He is a credit to his country and his uniform.”

As you can imagine, after reading this communication, I was deeply moved. At the time, I paused, looked up at my father, raised my eyebrows, and incredulously asked, “This was Uncle Ralph?” My father quietly responded affirmatively. We paused in a bit of shared silence. Today, I honor my Uncle Ralph.

Then, there are my siblings and cousins I honor today. Three of my own brothers, Harvey, David, and Kevin, all signed a pledge offering their lives in defense of this country and its Constitution. My brother David retired as a Colonel from the U.S. Air Force, my brother Harvey served both in the US Army and briefly in the RI National Guard as a Lieutenant. My brother, Kevin, served in the RI National Guard as a medic. A number of my cousins also served in the armed forces. Some cousins saw engaged warfare. I am proud and grateful for the sacrifices and choices these veterans made.

While there are many relatives who served in more modern times, I recently discovered, family members have been in uniform since the beginning of this country. Remarkably, they served even before the Revolutionary War. In colonial times, during the French and Indian War, my fifth great grandfather, Perez Waterman, served the Colonies with the rank of centinel. In the Revolutionary War, the same Perez Waterman, fought for this country answering the alarm for Lexington and Concord. In the War of 1812, Benjamin Waterman, Perez’s son, served as an officer. In the Civil War, Frederick Brayton and his father Luther Brayton, my great and great great grandfathers, honorably served the Union cause. One great uncle, William Wood, even gave his life for the Union cause. I honor all these men today.

Today I also honor and remember one of my favorite family veterans, he is a distant great grandfather who fought in the Revolutionary War. His name was James Wheaton Brayton and he is my fourth great grandfather on my mother’s side. James served as a private with the Rhode Island troops and also as a carpenter’s mate on the galley “Spitfire”and on the privateer “General Stark.”

The story is told, while fighting the British in the American navy, James broke his arm and was subsequently captured. He was then imprisoned on an enemy ship. After his arm sufficiently healed, his captors placed a pen in his hand, and instructed him to sign a document pledging allegiance to King George the Third.

With Brayton defiance, he slammed his arm down onto the table with such force he broke the bone a second time. The surgeon was obliged to set the break again and James was returned to the prison hold. Some time later, once the arm healed again, James was escorted to the table to sign his papers of allegiance a second time. He repeated his earlier performance and once again broke his arm upon the table. He was, the report states, “afterwards assigned to the Jersey prison ship.” This was a determined Patriot!

As I celebrate Veterans Day this year, with this blog post, you might think I’m celebrating war. I’m not. I’m celebrating the values for which these men and, more recently, women stood. Values like freedom, liberty, self determination, truth, honor, national pride, equality among the races, freedom from dictators, freedom from oppression, and for national security. These enduring values are worth fighting for and celebrating.

And finally, I share these stories as a window into the experiences of all the veterans we honor today. And while I honor and remember veterans in my own family, I also honor and remember those in your family – known and unknown. And at some point during this long weekend of celebrations, I will stand hat in hand, to honor our veterans and remember, “to men (and women) like this, our country owes much.”