Perhaps you’ve heard the phrase “a walk back in time?” A few years ago, I had the opportunity to better understand the meaning of this phrase. Let me explain.

After a little family history work some time ago, I discovered it was possible to visit nearly all the gravesites in one of my Pilgrim John Howland family lines. Starting with my father, I could visit nearly every grave in this line going all the way back to the Pilgrims John Howland and Elizabeth Tilley.

John Howland and Elizabeth Tilley were my 10th great-grandparents and these walks to my ancestors’ graves provided a unique glimpse into the past and became a true walk back in time for me.

My strolls, through a variety of cemeteries in southern New England, not only showed me where these folks were buried but they also taught me something of how they lived, where they lived, and who they were. These people, after all, were my ancestors, and they played a role in influencing the person I am today. Perhaps, you have also taken such a stroll?

Let me share with you the story of how I discovered these gravesites and also how I came to better understand some of the lives in this one Howland family line.

My research really began some years ago with conversations with my father. While I wasn’t terribly interested in family history or genealogy back then, I did listen carefully. My father had a keen interest in genealogy research and he regularly visited the gravesites of our ancestors. He would often share with me his finds discovered at the different cemeteries. His interest sparked my interest some years later.

A few years ago, as I realized I might be able to visit all the gravesites in this one particular Mayflower line, I was intrigued.

With this knowledge and interest, I began my quest to see if it were actually possible to visit all the gravesites back to John and Elizabeth Howland. I decided I would start with my father’s gravesite and work my way backwards in time. It was truly a walk back in time.

As you can imagine, my research was done both online and in the field. I knew most of my ancestors were buried on Cape Cod well into the fifth generation back and I also knew where they were buried. This was the easy part. It was the seven generations beyond these which caused some challenges. Of course, I used Ancestry and Find-A-Grave for my initial online research but while these research sites are helpful, they are not without significant limitations. Visiting each cemetery was a must.

The gravesites from my father through my third great-grandparents were all easy enough to find as I had previously visited them. I started with these individuals. All the graves, except one, were on Cape Cod and the off-Cape ancestor was buried in a family plot in nearby Providence, Rhode Island. I visited these graves, photographed the stones, and paused to consider what life was like for each ancestor.

I knew the details of my father’s life, of course, and my grandmother and my great-grandmother but it was while visiting my second great-grandmother, Ellen Gray Waterman, and her father, my third great-grandfather, Charles Thatcher Gray, both buried in the West Barnstable cemetery, that some previously unknown facts struck me as interesting and even touching.

As I stood beside my second great-grandmother’s grave on a cool spring day, some elements of her life came to my mind. Ellen was born in Barnstable, Massachusetts in 1832 and died in the 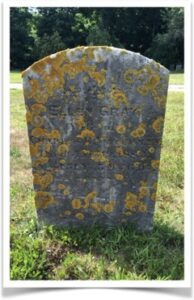 same town about 50 years later in 1883. Death records in Massachusetts indicate her relatively short life was sadly truncated by a tumor accompanied by dropsy. Dropsy, I was later to learn, was either a form of edema or possibly a general wasting away of the body. The tumor, of course, was likely cancer. As I stood near her grave, I thought especially of Ellen’s last years.

Earlier in her life, Ellen moved with her husband, Charles Henry Waterman, to New Jersey and because of poor health returned to her parents’ home in Barnstable. It was there she died.

In my mind’s eye, I imagine her father (her mother having died a few years earlier) caring for his daughter as her life slowly slipped away. I imagine all the struggle and heartache this passing might have entailed.

Nearby to Ellen’s grave, directly beside it in fact, I found her father, Charles Thatcher Gray. In the census data I reviewed, I discovered Charles was a blacksmith. I find knowing an ancestor’s occupation quite interesting and I wondered to myself if my third great-grandfather, Charles, labored nearby at a local blacksmith shop still maintained today for historical purposes in Barnstable.

What struck me most, however, was the date of Charles Gray’s death. He died in August of 1883. This was just seven months after his daughter’s death. Charles’ wife had also died a few years previously and I wondered if the death of his wife and then the challenges of caring for his sick and dying daughter lead to Charles’ own death. I wondered if his body and soul were just too weary to go on after the stress of the last few years and he passed away from a broken heart shortly after his daughter’s passing.

These were the kinds of stories that came to mind as I made my way through so many New England cemeteries.

From Charles Thatcher Gray, I followed the genealogical path up to Charles’ father, Joshua Gray. This ancestor and his story also piqued my interest. He was a captain of a packet ship which sailed between Yarmouth and Boston and the son of another captain, Joshua Gray, a Revolutionary War Officer. I found this all fascinating.

This last visit had a unique and mystifying feature to it. On the morning I found James Gorham, Sr’s grave, I wasn’t looking for him at all and was actually driving with a friend to an unrelated family activity when we came upon the cemetery where he was laid to rest.

In the past, I had driven down Rt. 6A on Cape Cod thousands of times and never gave the cemeteries dotting this highway much thought. Now, I knew each old hill and green expanse contained copious distant aunts, uncles, and cousins. More than that, many contained the graves of my great and great-great-grandparents.

As I looked at my driver, I mentioned we were nearing Lothrop Hill Cemetery. She knew from past experience what was coming next and before I could make the request she said, “No, we’re already running late. We’re not stopping.” “Please,” I implored like a petulant child. “I’ll only take a quick look so I can get the lay of the land. Nothing more. Ten minutes. Tops.” She begins pulling the car over to the side of the road and while applying the brakes she says strongly, “Ten minutes.”

I scrambled out of the car, practically before the tires stopped rolling along the asphalt, and ambled across the busy street and into the dewy grass of this ancient and sacred hill.

As promised, I was only going to walk briefly among a few rows of headstones, look at some names, and generally get the lay of the land. I often do this. My first visit to a new cemetery usually involves a brief “overview walk” allowing me to gauge the scope of the task before me and to better understand the layout of the grounds.

No sooner had I walked among two or three rows of this significantly large cemetery when I felt an invisible tug towards the center of the graveyard. A tree caught my interest and I thought I’d go have a look. On my way, I stopped and looked at a couple of stones but my attention was 500 hundred yards ahead and I knew the clock was ticking. Given my time constraints, going too far didn’t make a lot of sense but I continued making my way there. As I walked, I was inextricably drawn to a line of stones far in the distance. I followed this intuition. 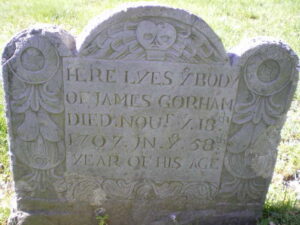 You might well guess the end of this story. That’s right. I walked right up to a stone, looked down, and much to my surprise and delight, there was James Gorham, Sr.’s headstone. I was stunned but also elated. After taking a few hurried pictures, I quickly made my way back to the car, under the original ten-minute expectation, where I found my waiting friend. “You’re not going to believe this…” I said.

From James Gorham, Sr.’s gravesite I made my way to the grave of his mother, Desire Howland. I was told she was buried in Cobb’s Hill Cemetery but over time her stone had succumbed to the elements. I visited her cemetery but never found her grave nor did I find the grave of her husband, John Gorham, my ninth great-grandfather, who died as a result of wounds suffered in the Great Swamp Fight in King Phillip’s War.

Visits to both of these final sites brought to completion a summer of joyful discoveries and connections with my Howland ancestors. I, indeed, learned something of how they lived, where they lived, and a little bit of the fabric of each person’s life.