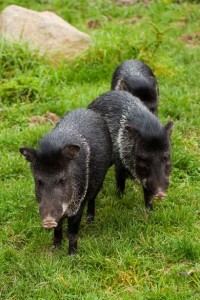 Music, my father and love were the themes presented in my first blog post. In this, blog post, I am bringing my theme a little closer to my temporary home in Arizona by sharing an animal encounter I experienced on my first day in the desert.

While rattle snakes, free range cattle, baby squirrels, skunks, gila monsters, tarantulas, cardinals, owls, road runners, coyotes and a hedgehog named Henry all feature in the entire story of my desert animal encounters, for today’s brief blog post, I’ll start the longer narrative of animal encounters with a short reflection on my encounter with Arizona javelinas. In fact, this is where all my Arizona animal encounters actually began.

You say you don’t know what a javelina is? Well, neither did I until this first encounter removed my unfamiliarity. This dramatic encounter, on my first night in Arizona, proved to me – early on – that the desert night has its own world of determined nocturnal denizens.

The story unfolds when I arrived in Ajo, Arizona to rent an apartment from Ed and Charlene. Ed shares the same health condition as I do, Environmental Illness (EI), and he built a number of homes uniquely suited for people with this challenging illness. I’ll share more about Environmental Illness in another blog post but for the moment suffice it to say, this illness required I move from my comfortable life on the east coast to pursue temporary housing and healing in Arizona.

I arrived at Ed and Charlene’s house after a lengthy three day journey from Dallas, Texas. Dallas had hosted me for about two months as I sought treatment for Environmental Illness from a well known EI doctor there.

The last leg of the journey took me through the dusty desert of southern Arizona. This final leg of my trip seemed to be filled with an endless and barren landscape. When I arrived at Ed and Charlene’s house, as you might imagine, I was beat from the long journey.

Having never visited the southwest desert before, I found myself a bit shell-shocked, disoriented and downright weary from my drive through the expansive desert. The perceived emptiness seemed to engulf me.

Ed and Charlene received this tuckered traveler graciously enough with a hearty meal and some warm table fellowship. It was good to be among folks who were living vibrant lives and who shared similar health experiences. After this satisfying meal, I was lead to my apartment and quickly prepared myself for sleep. I was bushed!

Prior to getting ready for bed, I went outside to my little Nissan Versa (Which I named Rocinante – no offense to Steinbeck.) and removed two large plastic totes, my sleeping bag and other travel items and placed them carefully beside the back of my car. They seemed safe enough resting there against the cement wall dividing Ed’s property from the neighbor’s yard. I thought everything was well secured for the night. Little did I know.

“Get! Get out! Get out of here!” screamed Charlene at 3:00am just outside my bedroom window. I was sound asleep and her cries were more like distant sounds in a strange faraway dream than an actual call for alarm. I had traveled hard and consequently was dead asleep. I never fully awoke to investigate the commotion and rolled over and fell back asleep. Dead to the world.

It wasn’t until the morning that I realized the filthy and disorganized consequences of a javelina attack lay just outside my door.

Three or four stinky javelinas evidently came charging into the yard earlier in the morning and Charlene chased them away from the property and the goodies they encountered in my food storage totes. They also seemed to have fun with my sleeping bag which was left outside.

As I looked at my ripped apart plastic totes, rice cakes, almond butter and organic crackers strewn all over the yard, I knew something unexpected had taken place in the early morning.

In addition to the mess, this havoc was accompanied by a filthy smell that was something like the odor of wet skunk, dirty gym socks, and a musty bitter stench of fermenting garbage rolled into one. This smell, along with a filthy black residue, was all over my totes and seemingly infused into my sleeping bag. Such was what awaited me this first morning in Arizona. I was not happy. The sleeping bag was quickly tossed into the garbage!

What had happened, I thought to myself? I knew I had encountered something unknown to me but I had no idea what had happened. Then I vaguely remembered Charlene’s shouts from a few hours earlier.

Dazed and curious, I walked around to the back of the house where Charlene and Ed lived and gently knocked on the door. Charlene presented herself with a slight smile on her face and I said, “Good morning! What happened here last night?”

”Javelinas” she responded somberly. “Javelinas?” I queried. “What in the hell are Javelinas?” I stammered – completely confused but quite convinced I understood the consequences of their actions. She laughed.

Charlene couldn’t contain herself and let out a full laugh. “You don’t know what a javelina is?” she asked incredulously? Shaking my head, surveying the detritus filled yard and looking a little stunned she knew I had absolutely no idea what animal had attacked my food supplies the night before.

Charlene explained the javelina is an animal about the size of a large hog which looks like a wild boar or pig but is actually a giant RAT originally from South America. “A giant rat?” I thought. Yuck!  I was further amazed to learn it was not just one javelina that devoured my food and left a mess but several critters. Evidently, these animals travel in packs!

As it turned out these active night creatures, which Charlene had chased out of the yard at three am, are protected and it’s only legal to hunt them certain times a year. They have actually become somewhat of a nuisance in the small desert town of Ajo, Arizona. They will eat just about any garbage they can find and will surely break into food supplies left outside thinking they are snacks for the whole javelina community to enjoy.

I learned an early lesson on my first night in the Sonoran desert. There are indeed creatures lurking in the Arizona dark and it’s wise to leave no food outside for these roaming characters to consume! Moreover, what I initially thought was a barren lifeless landscape is actually brimming with animal activity!

As my encounters with animals have unfolded here in the desert, most were far more enjoyable! All have been educational. More on those in future blog posts! Have you had an interesting animal encounter? Please share your experience as a comment here! Thank you for reading!