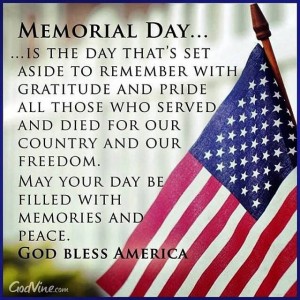 This weekend we celebrate Memorial Day in the United States of America. Truth be told, for many years, I never fully understood what or who we were honoring on this day in late May. For me, it was just a fun long weekend marking the beginning of summer.

Growing up in Rhode Island, the Memorial Day holiday was a weekend of cookouts, pool parties and family fun. In my later youth, living on Cape Cod, this day included some of the festivities of earlier days but with more traffic and more ocean. I never really understood we were honoring men and women who made the ultimate sacrifice in defense of our country. I understand this now.

They tell me, 150 years ago the Commander-in-Chief of the Grand Army of the Republic established what we today call Memorial Day. Then, it was a day set aside to honor the men who died in defense of the Union in the Civil War. Today, it has grown to be a national holiday celebrated to honor women and men who, in every war, gave their lives in defense of this country.

For a few years, I searched for William’s grave with no luck. And then one summer, after pouring over old cemetery plot maps, which provided no indication that William was buried in Bayview Cemetery, I decided to take a stroll down one of the rarely used cemetery pathways. I had walked this pathway before but for some reason I missed the stone. This day was different and my eye was drawn to the left as I strolled along on this summer day. 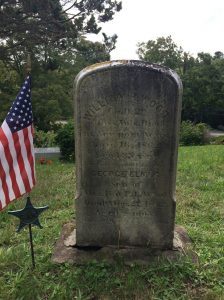 I was surprised when I saw the name, “Wood” on a nearby stone. “Could it be?” I wondered. Upon closer observation, I read the name William. There it was. “I’ll be darned,” I thought to myself. It was bit moss-covered and weather-worn but there it honorably stood on a knoll near other graves of that era.

I paused for a moment in gratitude for discovering the grave and in silent honor for the sacrifice William made so many years ago.

I thought about the feelings William must have experienced dying all alone in the far away land of Newport News, Virginia. I also thought about my ancestors gathered on this hill to say their goodbyes to William over 150 years ago.

After a few moments of solemnity, my mood changed to delight at my discovery. I called a friend of mine, exclaiming, “You’re not going to believe who I found!” After sharing who I had discovered, I suggested we meet at the cemetery, clean up the stone, say a few words of thanks and enjoy a picnic on the hill. We did just that!

This year, I was hoping to return to Sandwich, Massachusetts on Memorial Day to place a flag on my great-uncle’s grave in honor of his service. Unfortunately, Covid 19 limits my ability to travel this spring so I must honor my Great-Uncle William in a different way from afar.

And as I honor my great-uncle, I also honor all the men and women who made the ultimate sacrifice for our country. I am especially reminded of those soldiers, like my Great-Uncle William, who didn’t die on the raging battlefield of war but died from associated circumstances of conflict in a more remote location. They died heroically and gave their all for their country.

I’m also thinking of men and women who return from war, even to this day, living for a time with PTSD, physical wounds, chemical exposure illnesses, depression, etc. only to die far removed from the conflict from the lingering consequences of their war-time duty. Lives cut short. Not all war-related deaths take place on the battlefield.

So this Memorial Day, as we celebrate the holiday with barbecues and family get-togethers, I am keenly aware of the reason for the holiday and I know that I will be one of the many Americans who takes a moment to reflect upon the honor, courage and commitment displayed by those men and women who died in service to their country. We owe them a great debt of gratitude.

May your Memorial Day festivities be filled with solemn remembering, joyful celebrating and lasting family memories.